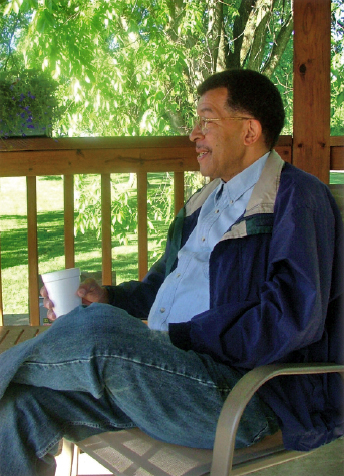 His Story:
On April 29, 2007 Tom Taylor lost his wife to lung cancer; one year to the day later, April 29, 2008, Tom’s mother passed away, also a victim of lung cancer. Taylor received word of his mother’s death while he was staying at the Wright-Patterson Air Force Base Fisher House as he was receiving treatment for colon cancer.

“This place has made such a difference in my life,” Taylor said, while sitting outside of the compassionate care facility, located a few blocks away for the base hospital facility.  “Listen, do you hear those birds chirping in that tree? I can now appreciate them even more,” he said in a quiet, yet sincere tone.

His “home away from home;” it was Taylor’s fifth time staying at the house which offers free lodging and meals for individuals and or fam-ily during extended hospital stays for treatment or surgery.

“It’s tough to stay with friends when you’re going through cancer treatment;  it’s different when you’re staying with others that are experiencing some of the same type challenges. When we’re here, we can share.

“At some point during the day – we might meet in the kitchen or in the living room – we come together and share; it’s that binding that’s spiritual… actually medicinal,” he said.

Before Tom’s wife lost her battle to cancer she offered him her “prayer beads,” according to the retiree, suggesting that the beads would give him comfort at times of need. After she passed, Tom offered the beads to his mother, repeating the same words as his wife. When his mother was discovered, passing one year later, she was found grasping those same prayer beads.

“I really believe my wife came down to get my mother,” he said, his voice cracking with emotion.

Taylor has undergone two separate surgeries during his battle, both at the Wright-Patterson AFB Hospital. Initially, doctors removed part of his colon.  After allowing the area to heal, a second surgery was required to re-connect the colon pathway.

Because the Cleveland-area resident has displayed positive response to continuing cancer treatment and to both surgeries, he has now been given a high probability of survival.

“Many of our families, especially retirees, simply cannot afford to stay in a hotel during these extended treatments; this house – the staff, the volunteers, and the others facing like circumstances – well, let’s just say they are ALL caring. I’ve been a part of it and I can see what this place does for families,” he added, carrying long pauses in his delivery.

Although Taylor worked in this area for 13 years as a defense contractor, he wasn’t aware that such a facility existed.

“We need to do a better job of letting people know about this very caring place,” he stated with sincere compassion. “If telling of my events and feelings allows just one more person to understand the importance of this facility today, and for the future, then my story is worth telling… worth repeating,” he said, as an ever so slight grin appeared upon his face. “I am so thankful.”