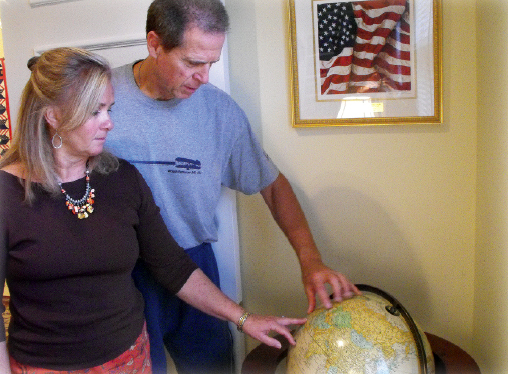 Beau Links, critically injured while deployed in Iraq, 2005, spent one week in hospital at Landstuhl Army Base Hospital, German before transferring stateside to Bethesda, Maryland. A patient at Bethesda National Naval Hospital for more than a month, Links was transferred to Dayton’s Miami Valley Hospital for Rehabilitation and then was later put under the care of the Wright-Patterson AFB Physical Therapy Clinic.

His  Story (as told by Beau’s parents):

It was Mother’s Day, May 8, 2005. Beau and his fellow Lima Company corpsmen were assigned to search homes in New Ubaydi, Iraq, looking for insurgents held up in the vacated homes. As Links entered the dwelling he was met with open fire and an enemy grenade, which severely ripped into his left leg.

Instinctively, with serious gun and shrapnel wounds to his neck, shoulder, arm, and leg, Links drug himself to an adjacent unoccupied room and placed himself in a defense posture, not knowing if the insurgents or his corpsmen would be the first to enter.

Placing themselves in harm’s way, LCPL Crum, LCPL Hewitt and LCPL Leary entered the building, drug Links out of the dwelling and immediately began life-saving first aid on the wounded Marine. The three corpsmen, ranging in ages from 19-21, convinced Beau that he would live and that everything would soon be okay, shouting encouragement as they secured the area.

Weeks later, while undergoing every other day surgery in Bethesda, Beau would whisper to his father, “that day was the best day in my life.  I didn’t know what was behind that door when I went in, but MY corps – they knew what they would be faced with – and yet they still came in to save me,” Kirk recalled, as his eyes welled with tears.

The call that parents of military troops pray against, came the day after Mother’s Day; they were told that Beau had sustained critical injuries and it was questionable whether or not he would live through the ordeal.

Medical Evacuation units airlifted Beau to an Army Base Hospital in Germany, where it took more than one week to stabilize the Marine. On that Friday the Links were told that it appeared Beau would live, but extensive surgery would be required; he would be flown back to the states and would find the Bethesda National Naval Hospital as his respite.

Upon their arrival at Bethesda, following a silence-soaked 10-hour drive to Washington, Linda noted that the first night they found an off-base hotel to stay, but that she, her husband and Beau’s girlfriend, now wife Courtney, “really didn’t know what to expect as we drove from Dayton to the east coast.”

“When we got there (at Bethesda), we had nowhere to go,” Kirk said. “I don’t think the Marines were prepared for the number of troop casualties and injuries coming from Iraq.”

The next night, and for 34 nights that followed, the Bethesda Fisher House became their refuge.  Like so many other military families, the Links found that the compassionate care facility, which was within walking distance from the hospital, became their home away from home. It was a place to rejuvenate and prepare for their son’s on-going medical challenges and successes.

“Everyone needs to go to the fifth floor at Bethesda,” Kirk said of the military hospital’s critical care unit. “I would not wish a Fisher House stay on anyone, but if it’s needed. Thank God there are Fisher Houses,” the retired USAF Lt. Col. said.

The compassion shared at Fisher Houses throughout the world was ideally characterized as Kirk retold a memory at the Bethesda center: “I was in the kitchen of the Fisher House when the manager came through with a couple and was describing the features of the house to them. He introduced me to them and they asked if my son was injured and how he was doing,” Kirk recalled.

“After a brief response, I asked about their son.  “Our son did not make it,” responded the father of the fallen soldier.

“I fell back against the counter and cried so hard that the parents hugged me, telling me it would be alright.  They had lost their son and they were consoling me. I have never experienced so much compassion as from anyone as I saw first-hand at the Fisher House,” Kirk said.

“To a person, they (the Fisher House staff) seemed to have a sense of when to talk to me and when to leave me alone. Sometimes I just needed my space, and other times I needed to release,” he said.

“Fisher House was a godsend to us,” Linda said. “We were able to be at Beau’s side every time he opened his eyes. Kirk would stay at the hospital during the night; we would go during the day. Without the Fisher House we wouldn’t have been able to be there when Beau needed us most.

Today, Beau is a senior at Wright State University; following March graduation, he plans to enter medical school and has aspirations of re-joining the armed services in the medical profession, “to pay his country back for saving HIS life,” his father related.

After months of rehabilitation – at Miami Valley Hospital and  through the Physical Therapy Clinic at WPAFB – Beau is able to run and frequently bikes. Although there was a great deal of nerve damage to repair, he will now be able to lead a productive and “repaying life,” even after being told he may never walk again.

Beau, his wife, and his parents credit his fellow corpsmen, the many medical staffs (from the medical evacuation to surgery and to rehabilitation), and the caring confines; the “safe haven” of the Fisher House, for his miraculous recovery.

Kirk is the fitness director for the three centers at Wright-Patt; and Linda now volunteers her time, assisting at the WPAFB Fisher House. Beau is the youngest of the three sons. Justin, the oldest, served two years in the U.S. Navy and is now a Captain in the 101st Airborne Division of the U.S. Army. Lance is a science teacher at Lebanon High School.

In 2005 the Columbus-based Lima Company became one of the most devastated troops in the Iraqi conflict with 23 fallen warriors and more than 50 critically injured. Their heroic stories are often retold.