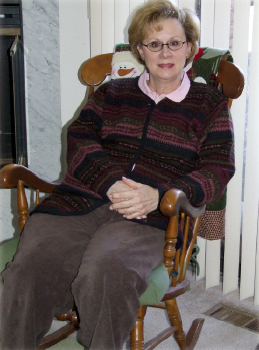 One year ago, last summer, Julie Hoppe “knew something just wasn’t right. It hurt like I had a deep bruise, but I hadn’t done anything to injure myself.”

Weeks later… “thanks to Joanin mammography and Dr. Quinn, who both went beyond their call of duty,” according to Julie, after several biopsies and a performed lumpectomy, Hoppe would be told that she had cancer…  invasive carcinoma.

“I think every woman, in the back of her mind, is concerned about the possibility of breast cancer,” the mother of three grown sons said. “Then when you hear the words, well, you begin to think and say to yourself that life will no longer be the same,” she added, her voice cracking just a bit as she attempted to control her emotion.

Julie was correct; life would no longer be the same for her.  In January of this year she underwent double mastectomy and then reconstructive surgery at Miami Valley Hospital. And she would meet Dr. David J. Hoopes, who would soon become her “hero,” not only because of his medical assistance, but also in his guidance and concern for her emotional well-being, introducing Julie to the Fisher Nightingale Houses at Wright-Patt. Hoopes, a captain in the Medical Corps, USAF serves as Assistant Professor of Radiology and Radiological Sciences, Uniformed Services, University of the Health Sciences at Wright Patterson Medical Center.

“I have stayed here 60-to-80 days over the past year,” the thankful woman said, holding her hands out to embrace and acknowledge the Fisher House, as she sat in the facility’s family/living room area. “And it was Dr. Hoopes that first told me about this beautiful facility for patients and for their families while in treatment,” Julie added.

“No one could have prepared me for the compassion and the gentleness that Karen (Healea, house manager) and Barbara (Howe, assistant manager) and the entire staff and volunteers, for that matter,  give to all of their guests,” a humbled woman recounted.

“It was if they were taking on your emotions, trying to ease my burden, giving me strength to carry on,” Julie said. “I call them God’s little angels,” she said of the staff and volunteers. “As of today, I have only a one percent chance of recurring breast cancer.”

For the weeks and months after surgery this woman would have been faced with an early-morning “wake-up call” at 2 a.m. allowing her to drive from her hometown area of Hillsboro-Chillicothe in order to meet five-day-a-week radiation treatment in the Dayton area. Julie was also diagnosed with Lymphoma.

Becoming a temporary “resident” of the Fisher House gave Julie the opportunity to rest in the confines of her “second home” in preparation for the next day’s treatment.

“I’m reminded of the story in the bible about an ill man everyone passed by on their daily business, but the Good Samaritan stopped and took immediate care and paid for his room and board. The Fisher House staff is filled with such compassion …even in this busy world we live in,” she added, doing her best to hold back the emotion that filled her voice inflection.

“I cannot say enough about this place. In a period of less than a year, I went from… (long pauses and signs of heartfelt emotions interrupted her train of thought)… to where I am today; I’m home at the Fisher House,” Julie said. “And this facility would not be five-star if it wasn’t for the volunteers.”

Hoppe, knowing that WPAFB is now on the “waiting list” for the addition of an-other Fisher House and in the throws of a capital campaign, was eager to tell of her obstacles that have turned into opportunities.

“There are very few people that know these facilities are located all over the world, providing compassionate care for individuals like me. We need to encourage more people to get involved, whether it’s through volunteerism and … or financial support,” she added.

According to this cancer survivor, one out of every three women will develop some type of breast cancer during their lives.

“I just want everyone to know the signs of early detection and then to know there are people and facilities like this (Fisher House) to help get you through the tough times. This is my family, and every day I remind myself of how fortunate I have been,” the survivor stated in a grateful, yet victorious tone.