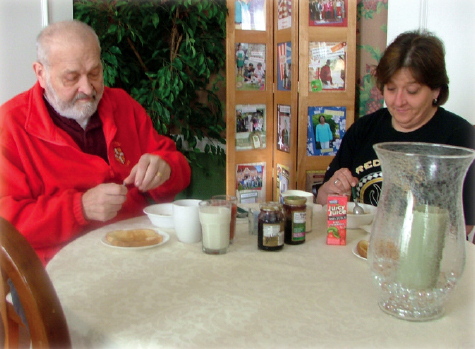 His Story:
On April 18, 2008 Eldon Milligan received a kidney transplant which required that he spend ten days in the hospital and then remain in the area as a precautionary measure as well as for follow-up treatment. After a brief two-day recuperation stay at the Fisher House Compassionate Care Facility on Wright-Patterson Air Force Base, Milligan was rushed back to Miami Valley Hospital due to post-surgery complications where he spent an additional 12 days.
Local rest and recuperation was then required after the second emergency procedure; Milligan returned to the Fisher House, joining one of two daughters, for what would be a three-to-four week stay.

Plans for the kidney transplant procedure began nearly two years earlier when Milligan asked to be put on the kidney recipient waiting list at MVH. He reported that the Dayton hospital seemed like a wise choice, since his one daughter lived in the area. He had planned to stay at his daughter and son-in-law’s home during the procedures. Unfortunately, the couple was faced with a job relocation to Chillicothe and Milligan was faced with possibly selecting another hospital and starting back at the bottom of a kidney donation-recipient request list.

“It could have been another two years,” the Michigan resident said, if he were to select another medical facility. “So I started calling around. I knew I wouldn’t be able to afford a motel for that long of a stay. Wright-Patt happened to be one of the first places I called.”

With tears rolling down the cheeks of this veteran’s humbled face, he looked the interviewer square in the eye and slowly pronounced, “So you see, the surgeons did a tremendous job, of which I am grateful, but this house, and the many people associated with this house, they actually saved my life.”

He went on to say that until he received initial calls, he had never heard of a compassionate care facility nor did he know that like facilities exist on a number of military bases throughout the world.

“Look at the sign (in front of the Fisher House at WPAFB) – it talks about compassion. This is THE most compassionate place I know,” he said, now attempting to control obvious emotional feelings. “Since I have retired, I have never been so proud to be a veteran, as I am today. This place and the people have made me feel SO proud.”

By this time, Milligan, his second daughter, who “relieved” her sister mid-way through the medical and recuperation ordeal, and the interviewer were all displaying tears of joy and gratitude.

“There’s something about it (Fisher, Nightingale Houses); when you first walk through the door, that gives you a feeling of compassion and caring,” Laura Bowen, Oklahoma resident and daughter of Milligan said.

The recent kidney transplant recipient went on to praise the staff and volunteers and remarked how “accommodating” everyone had been, while still respecting his privacy.

“If you’ve ever sat in your house saying, ‘Gee, I wish I could do some-thing for the military and the people that defend our country,’ this is the perfect way,” the retired Naval officer stated. “There are many stories, just like mine…. And maybe there are some that can tell it better than me, but every person should know how this place can actually save lives.”