The Dream Is Born The first compassionate care house in the Department of Defense was the dream of a scientist at the Armstrong Aerospace Medical Research Lab at Wright-Patterson on a humanitarian assignment.

Captain Gretchen Lizza thought of the idea for the Nightingale House when her son, Tony, was diagnosed with leukemia. In the months of initial therapy, Gretchen met many families with similar circumstances. They were in shock, emotionally overwhelmed and facing long hospital stays for their loved ones. They also had the added burden of not having an affordable place to stay.

Gretchen saw the need for a home-away-from­-home. She took her idea to Colonel Dennis P. Tewel, Commander of the 2750th Air Base Wing, and convinced him of the need. Her idea for an on-base version of the Ronald McDonald House was taken all the way to the Pentagon. After months of work, authority was obtained for an existing duplex on base to be redesigned and remodeled and in May 1990 the house was ready to become a home for visiting families.

The house needed a name that conveyed its special purpose. “Nightingale,” a name synonymous with tender, loving care, and the nickname for the C-9 medical evacuation transport plane, was the perfect fit. So the dream of the Nightingale House became a reality.

With the opening of Fisher House II in April 2011, the Nightingale House was returned to the military and demolished.

Captain Lizza’s motto for the Nightingale House was quite simple, “If all hands that reach could touch.” To her that meant by reaching out and touching someone, you can make a difference in their life. We are all thankful that she took that time, in the midst of her personal tragedy, to reach out and touch so many families in need.

Even after the Lizzas retired from the Air Force in 1993 they continued to stay in contact with the House managers and volunteers. In August of 1996, her son Tony lost his battle with leukemia. Today, Gretchen and Carl are keeping Tony’s memory and legacy alive through “Tony’s Gang,” a non-profit organization founded to support children with serious illness and their families (www.tonysgang.com).

The Lizzas hope to educate people about the needs and challenges of families facing a serious illness. They want to train those who want to help but don’t know how to act or what to do. Finally, they hope to foster what they call a “kid-to-kid” network of support. They felt that Tony lived longer than many of his peer group in part because of the support he had.

The national headquarters of Tony’s Gang opened in Philadelphia in support of Children’s Hospital. The Lizzas took their tragedy and built something positive and lasting from it. In their eyes, it gives added meaning to their son’s life. 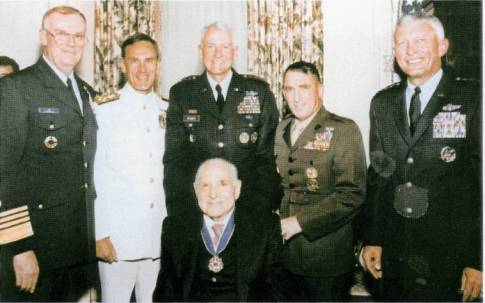 Zachary Fisher and the Joint Chiefs of Staff at a reception following the presentation of the Presidential Freedom Award. (September 14, 1998)

Acknowledged by the Armed Forces as the nation’s most dedicated patriot, Zachary Fisher considered himself to be the luckiest man alive. He had two rewarding careers, one in the invest­ment building sector of New York’s real estate industry, the other as a private citizen serving his country. Born in Brooklyn, New York, young Zachary left high school at age 16 to help in the family construction business. He laid bricks until a serious building accident nearly cost him his left leg. When Japan attacked Pearl Harbor in December 1941, he was rejected by the military due to his injury.

Over the years, Zachary’s family business skyrocketed along with his devotion to his country. Fisher Construction is one of the industry’s leaders, contributing some of the most prestigious corporate office buildings to the New York skyline. After 50 successful years as a real estate developer, Zachary Fisher embarked on a new career that would ultimately touch the lives of thousands of Americans. Zachary wanted to give something back to those who gave their lives to preserve his freedom and that feeling stayed with him his entire life. Zachary’s future wife, Elizabeth, was also passionate about serving the armed forces from her time spent traveling overseas during World War II as an entertainer with the USO.

Their marriage in 1943 was the beginning of a love story – two extraordinary people, their love for each other and for their country. They began searching for ways to support military families around the world.

In 1983, the Fishers established the “Zachary and Elizabeth M. Fisher Armed Forces Foundation” to provide financial assistance to military families in need. That need arose when 47 crewmen were killed in a 1989 turret explosion aboard the USS Iowa. The Fishers gave each of the families $25,000 along with a letter explaining that while nothing could compensate the loss of their loved ones, they hoped there was some comfort in knowing that two strangers cared enough about their grief to send a token of their remorse. Again, they stepped in to help the families of casualties from the Marine Barracks bombing in Beirut.

The Fishers’ generosity has been extraordinary. Besides enormous financial assistance, college scholarships and the building of New York’s Intrepid Sea-Air-Space Museum, the Fishers continued to ask what more they could do for the military family. Then, Pauline Trost, wife of former Chief of Naval Operations Admiral Carlisle Trost, suggested the idea for comfortable, affordable family housing near military hospitals. The Fisher’s knew this need fit perfectly with their objectives. The Houses became a tangible way of finally expressing their gratitude to the men and women in uniform.

In 1998, Zachary Fisher received the Presidential Medal of Freedom, the highest award the country can bestow on a civilian. In 1999, Public Law 106-161 conferred “honorary veteran” status on philanthropist Zachary Fisher, making him the second individual (Bob Hope being the first) so recognized.

Today, the Fishers’ vision has resulted in the building of 92 Fisher Homes for Departments of Defense and Veterans Affairs medical centers. If that number isn’t impressive enough, on any given night, more than 1,200 families can safely and free of charge stay in a Fisher House. 413,000 families have been served since 1990, $525 million in savings to families since 1990 and 10 million days of lodging have been provided. Fisher House I opened its doors in May of 1994 and Fisher House II opened in April 2011. The newest Fisher House, at the Dayton VA Medical Center, opened on November 7, 2018. To date, these Fisher Houses have served thousands of families. The average length of stay is eleven days (some guests stay for only a day or two while others stay for two months or more and we’ve had guests stay for up to a year). The Houses run at 100 percent occupancy almost every week with an extensive waiting list. Turning families away is the hardest part of the manager’s job.

All utilities are provided, including private phone lines in each room. This allows our guests direct communication with the hospital. Until September 30, 2006, rooms cost a nominal $10 a night which helped cover some of the operational expenses. However, on October 1, the Fisher House Foundation began paying the $10 a night room fee, so guests no longer pay to stay in any Fisher Houses.

We are encouraged that even after Zachary’s death in 1999, the Fisher Foundation will continue its work under the leadership of his nephews.